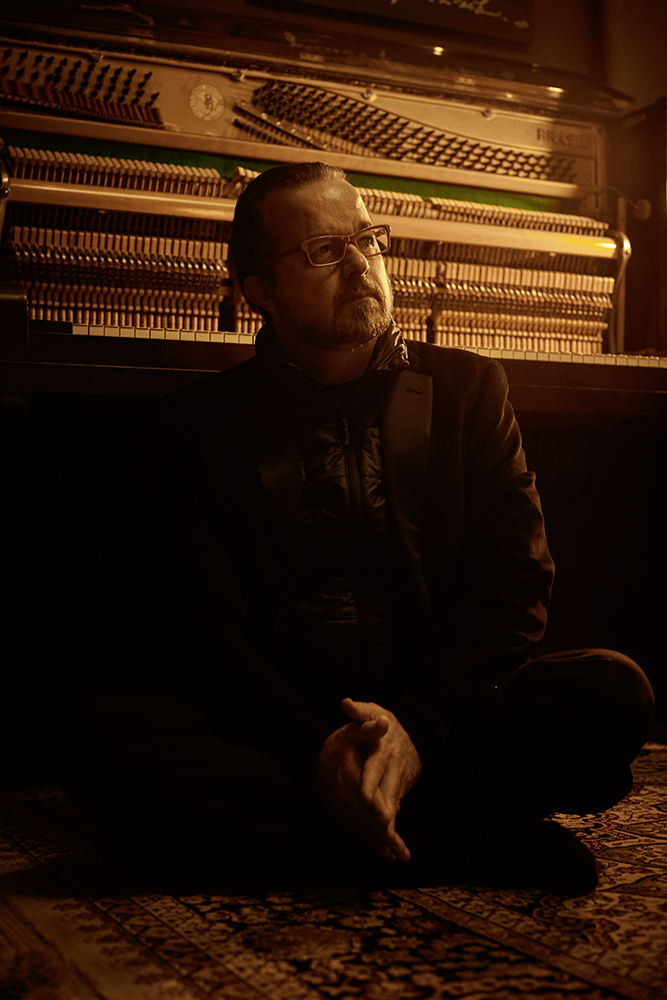 Corciolli was born in Sao Paulo, Brazil in January 08, 1968 and began to study piano at the age of thirteen with Mrs. Nair Tabet, a disciple of great Brazilian pianist and pedagogue Magdalena Tagliaferro. Then, studying with Cacho Souza, he improved on the art of harmonizing and improvising jazz and Brazilian music. However, it was the electronic synthesizers, with their unlimited sonic possibilities, that deepened his relationship with music and composition.

He graduated with a degree in architecture, without ever leaving the music aside. Over the years, he played in several bands and also as a solo pianist, but it was the Brazilian bass legend Celso Pixinga and soon after, with the rhumba flamenco band Espírito Cigano, that consolidated his musical and professional experience. In 1992, he left the band in search of his own melodies.

A year later, he founded his own record label Azul Music, releasing his first solo album All That Binds Us. In 1995 Azul Music released his second album, Unio Mystica, a daring musical suite recorded in the Monastery of São Bento (São Paulo, Brazil) with Gregorian chants, medieval latin lyrics, a soprano voice and orchestral arrangements. Acclaimed by the public and critics, the album was released in forty countries and received a special blessing from His Holiness Pope John Paul II. The following year, Corciolli performed with the Tibetan Monks of Gaden Shartse in two memorable concerts at the Latin America´s memorial, in São Paulo. With the monks, he recorded and released the album The New Moon of East, the first-ever album of sacred Tibetan tradition with the music of a western composer.

As an independent artist, his remarkable accomplishments include more than 2M CDs sold; Participation in soundtracks and international compilations alongside artists like Hans Zimmer, Vangelis, Enigma, The Alan Parsons Project, Sarah Brightman and Luciano Pavarotti among others; He has also produced several artists and coordinated hundreds of projects for Azul Music, including two collections of CDs for the outstanding Brazilian magazine Caras, which together sum 12M CDs marketed in newsstands all over Brazil. On digital platforms, his music has gained remarkable recognition, with more than 400M streams to date. In recent years, he has been dedicated to composing orchestral music and original soundtracks, incorporating the language of the synthesizers to the acoustic and orchestral sounds.

Moving his inspiration to create true sonic sculptures and a precise aesthetic sense in elaborate layers of textures and subtle sound plans, it is possible to say that his music adds and transcends several genres. But it mainly seeks to offer the listeners the opportunity to discover within themselves, an intimate space of perception and transforming experience.

Music to enjoy in the silent spaces of the soul.

“This is exotic music, designed to heighten the senses, both within an air of mystery and through kinetic, snappy rhythms”

“Corciolli is a master at layering all his sounds into the mix, with an almost uncanny ability to allow the assorted components to softly float into the track’s foreground and then transition backward, allowing another instrumental sound to take over. In addition, his choice of keyboards and synthesizers is absolutely first-rate”

“Playing an array of synthesizers offset by quietly melancholic acoustic piano, Corciolli is a symphony unto himself. When he’s able to boil all of it down into such simple beauty as he does here, adding so much sincere, heartfelt love to a simple array of electronic and acoustic sounds, you realize what a gift it is to be able to be a part of it”

“His symbiosis with the keyboards is such that he can emulate all the possible and imaginable instruments: all sublimated in an incredibly credible way”

“What a wonderful surprise from Brazil. It is still possible to discover music that is new to you but is in fact music by a renowned musician, composer, keyboardist and producer with a 25-year career and around 2 million albums sold!”